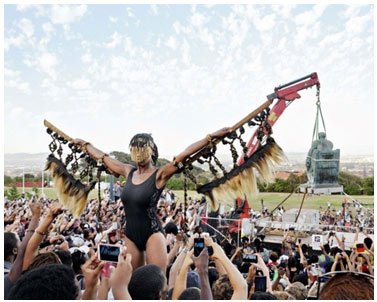 Performances are not carved in stone, made for eternity like statues – but wait… are statues really made for eternity? And which memory will last: The white male colonialist’s statue or the victorious black female body? One thing is for sure: Sethembile Msezane’s performance “Chapungu – The Day Rhodes Fell” accompanying the removal of the Rhodes statue and cheering students in front of the buildings of the University of Cape Town will be carved into my memory forever. This very special, raw, unique moment was fortunately beautifully captured by a photographer and I had the privilege to see it in the SA National Gallery in Cape Town this year. It made me super emotional. The exhibit was called ‘Art of Disruptions’.

This word accompanied me in 2016 like no other word. Whenever I close my eyes, thinking about this year, I see, hear, feel strong women of color protesting against rape.

But let us start at the beginning: Returning to my second home Cape Town in 2015 for the first time after many years, I experienced the fall of the Rhodes statue in front of UCT, initiated by protesting students. They were and still are protesting against racist university structures, an eurocentric syllabus, lack of representation in academia and super high student fees.

Many people around the world will narrate the story of a perfect victory against the racist apartheid system in South Africa in the 90s. In their fairy tales the perfect happy ending was created by establishing Nelson Mandela’s “rainbow nation” paradise. But it is not that easy. People love easy stories, but this is complex, nuanced, different for everybody.

Don’t get me wrong, I’m all for harmony and unity and colorful peace. And glitter on top of that. But there is still a long way to go and it doesn’t exactly help that mostly privileged people in and outside of South Africa love this tale and repeat it so often and loudly, that people impacted negatively by the current state of their home country are not being heard.

There is a huge gap between rich and poor, the access to education and other crucial services to live a healthy, happy and fulfilled life is not given to many people around the country and all of this is still deeply rooted in a system privileging white people over non-white people, but also men over women, rich over poor people, abled people over disabled people, heterosexual people over people in the LGBTQI community…

What I found truly inspiring while studying at Rhodes University in the small, usually very tranquil town Grahamstown this year was how after the protests around #Rhodesmustfall and #Feesmustfall all around the country, (queer) women of color started and led a protest against rape at this university, that was an inspiration to people all around the country, and how they could break the silence around a topic that is hardly ever addressed at all. Talking to my friends on campus I learned so much from them about inner strength and the power of unity. They could find the strength to stand up for their rights against all odds even though they face multiple forms of oppression,  being not only black OR women OR queer etc., but all of the above. The student documentary ‘Disrupt’ – a word used widely in the context of the protests against rape and now strongly connected to it in my head – shows how women have to face discrimination when asking for help after being raped, how victims often are portrayed as perpetrators and it shows the police brutality during the peaceful protests.

This particular part of the different protest movements around South Africa showed me that people need to rethink the way they view feminism. It is so important to reflect on how multiple forms of oppression and different privileges form individual social positions for every human being and how these different positions influence their quality of life! The important term to include when talking about social justice is: Intersectionality. Kimberle Crenshaw developed this term to differentiate between different forms of oppression in feminism. The way a black woman experiences patriarchy can be very different to how a white woman experiences patriarchy.

For many years, feminism was mostly influenced by white women. But how can we change society for the better and fight for social justice, if we put ourselves into very narrow categories and therefore perpetuate their divisive nature? How can we change narrow minded thinking, while not neglecting that society is split into different groups and that these mental borders are very real?

In my opinion there is one very clear solution: We have to use multi dimensional models of intersectionality and talk about how multiple forms of oppression influence each other! This is the only way we can leave behind grey boxes and see color instead of being !

In this blog I am going to address topics connected to intersectionality frequently. As a white woman having German citizenship and living in Europe (Without having to pay any student fees!) I do not want to own stories that are clearly not mine, but to spread the word a little more. Also, I want to educate people about white privilege and make white people aware of the fact that we need to learn and do something against oppressive systems in this world. At the same time my learning process goes on and I am very grateful for every opportunity to learn more.

Happy Holidays to you all! I hope you get to spend some time with people who love you dearly!

The following link leads you to an academic paper I wrote about Intersectionality and Mental Health. Unfortunately, it is written in German, but an English version might follow, once I have time to translate.

And this is ‘Disrupt’, a student documentary about the protests against ‘rape culture’ at Rhodes University:

View all posts by Sandra